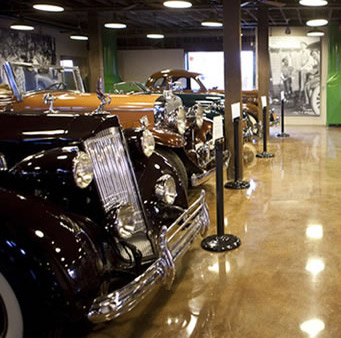 with a trip to the Motte Historical Museum in scenic Menifee, CA.

The odds are pretty good that you’ve not heard of the Motte Historical Car Museum in Menifee.  But if you have heard of it, and been there then you’d surely agree it’s well worth the trip.

The city in Southwestern Riverside County plays host to a cozy museum with a collection of very cool classic cars.  And they’re displayed in a building that, while fully restored as well, helps turn back the hands of time just like the vehicles it houses.

Who else but our own Professor, Clinton Quan, made the recent trip and shares the complete report in this iDriveSoCal Podcast.  Click play below and take a look at some of the classic beauties he spotted during his trip.

Tom Smith: This is the Motte Historical Museum, out in Menifee, California

Clinton Quan: There are definitely cars from the 1920s,

Focused on American cars crossing many generations, about two dozen vehicles in restored condition were on display. In a fun Western-style old barn with a high ceiling, the cars were well spaced and lit. Each vehicle has a placard describing the significance of its manufacturing, and the tie to the Motte family.  A number of the collection’s cars and trucks took decades to restore.  The labor-of-love vibe is evident in this sweet venue.