Q Home Owners Ask: What can I do to ensure that my home is properly covered?
Some may have lost coverage all together and ask WHAT NOW! SGB Insurance CAN Help!
A The most important thing you can do is have a conversation with your agent or carrier to be sure you have the right amount of coverage. Avoid putting just the minimum coverage on your home: Remember, if your home is destroyed, you need to have enough coverage to rebuild the entire home, so you’ll want to insure it for more than just the market value. Also, notify your insurer of renovations or changes that you make to your home — and don’t forget to check to be sure you have enough liability coverage.

Insurance Commissioner Ricardo Lara said that starting early next year his agency will significantly expand a state-created program that acts as the insurer of last resort.

After several years of destructive blazes, insurance companies have been canceling policies and raising rates on rural homeowners, according to government officials and industry experts.

Lara said his decision came after talking to thousands of residents across the state struggling to find coverage.

“Many have been dropped by their insurance company, even after decades with the company,” Lara said during the Thursday press briefing. 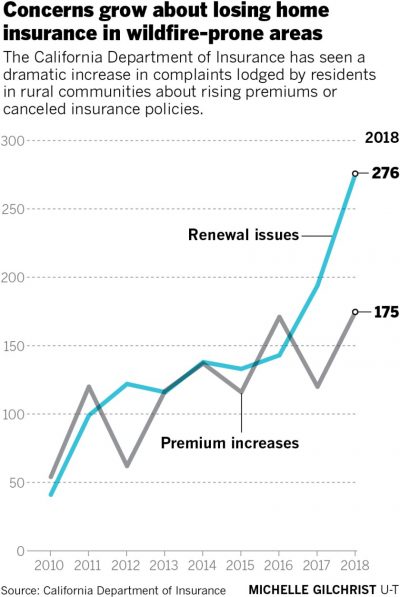 According to an August 2019 report in The Los Angeles Times, some California homeowners have incurred home insurance rate increases of over 420%. According to a CDI report, 10% of homeowners in affected areas received non-renewal notices from their insurance companies between 2015 and 2017.Nov 20, 2019

The California FAIR Plan (Fair Access to Insurance Requirements) currently covers up to $1.5 million in losses and is restricted to fire damage. All state-backed insurance companies are required to pay into the program.

Starting in April, the FAIR plan will cover up to $3 million in damages, and by June the insurance plan will be expanded to cover water damage and personal liability.

The changes, based largely on inflation rates, were aimed at making the policy more affordable for residents. Many homeowners on the FAIR plan have been forced to pay for a second policy to fully insure their homes.

“What the department has announced is a solution to a crisis that the insurance industry has created,” said Amy Bach, executive director of the California-based United Policyholders, adding: “I really commend the commissioner and his staff.”

Representatives with American Property Casualty Insurance Association, a trade groups representing many of the state’s largest insurance companies, has said the industry has been hit hard by wildfire damage in recent years.

The industry group issued a press statement following the announcement that said the changes could “hurt consumer choice.”

“The FAIR Plan was never intended to replace the private insurance market. Insurance Commissioner Lara’s move to expand the FAIR Plan’s policies … could have unintended consequences, potentially contributing to a further compacting of the market and fewer choices for consumers,” the statement read in part.

In 2017 and 2018, blazes — most notably the Camp Fire in Paradise — resulted in more than 124,000 claims valued at about $26 billion in losses, according to the California Department of Insurance.

Complaints by residents in high-fire areas over losing insurance nearly doubled in the last two years and has increased by about 570 percent since 2010, according to the agency.

FAIR Plan enrollment in rural areas has increased over the last five years by more than 11,500 policies, and officials expect that number to increase dramatically when figures are tallied for 2019 early next year.

Or You Could Just Give Us A Call