Credit Card Debt – What is the BEST Way to Pay it All Off?

Credit Card Debt – Paying it off the RIGHT Way. Do you know which credit cards you should pay down or pay off and cancel first.

Let’s see what CPA Stacy Johnson of Money Talks News has to say on the subject.

The Best Way to Kill Off Your Credit Card Debt

To figure out the best way to pay down debt, imagine yourself sailing in a storm-tossed sea and facing one big decision.

Which Debt to Pay: Smallest Balance or Highest Rate?

Credit card debt is sneaky. It starts off like a little brush fire but quickly explodes into an inferno, laying waste to your finances.

Millions of people find themselves in this unfortunate situation. But it’s never too late to crawl out of debt. There are a lot of different ways to pay down your obligations. We outline some of them in “7 New Ways to Destroy Your Debt.” 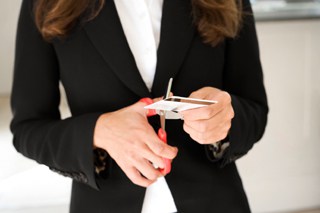 The best way to kill off your credit card debt is to pay it down as fast as possible. That means devoting every spare penny — raises, bonuses, gifts and even the coins in your pocket — to paying down everything you owe.

If you decide to take this approach, you have two major options. Both require one common element: motivation. If you aren’t going to make consistently paying down debt a priority, you lose out regardless of strategy.

In this model, you make just the minimum payment on every debt except the one with the highest interest rate — which is the one costing you the most money over time. For that debt, you throw whatever amount you can regularly afford beyond the minimum at that debt until it’s paid off.

Once that debt’s gone, your debt-paying budget stays the same — you just shift the biggest payment to the debt with the next-highest interest rate, paying minimums on the rest, until that one is paid off. Then, you go on down the line like that, knocking off each subsequent top debt one at a time.

The obvious advantage to this model is you save the most money possible over the long term. The downside: Progress may appear to be slower than it actually is. Having a large number of debts may feel more stressful even though you’re paying down the debts in the most effective way to eliminate them.

The Shortest Path to an Amazing Retirement

As with the first model, you pay the minimum on all but one debt and “snowball” the payments from one debt to the next as they disappear. However, the difference here is that you focus first on the smallest debt, and move through them one by one, allowing you to knock accounts off the list faster.

The advantage? Having fewer accounts to juggle feels good. It’s a result we can easily see: Balances shifting downward are not as impressive or obvious as a big zero. Some people need to see that kind of accomplishment to stay motivated.

Unfortunately, this means you’re actually making slower progress on your overall debt because those big-interest accounts are still accruing as you pay off the smaller balances.

Be Careful to NOT Close all Your Credit Card Accounts

Why Did My Credit Score Drop After Paying Off Debt?

Unsure which option is best? Picture this

Imagine it this way: You’re trying to bail out your sinking ship while sailing on a storm-tossed sea. Unfortunately, a bunch of creditors are standing behind you with beach pails, pouring more water in.

The smallest guy with the littlest bucket is right in front of you. At the far end of the boat, a monster-sized jerk with a huge bucket stands, grinning with an evil gleam in his eye.

Since the big jerk has the biggest bucket, it makes sense to eliminate him first, then go to the next biggest jerk-and-bucket in line. But take another look — that guy at the end of the boat is awfully large, isn’t he?

Perhaps it will be easier to tackle that big fella after you’ve eliminated the five smallest guys first.

The right answer depends on you. If you’re ready for the challenge, head directly toward the big jerk. If you need a bit more motivation and confidence, tackle those smaller jerks first.

No matter which path you choose, you can’t go wrong as long as you start paying down that debt — right now, with all the energy you can muster.

If you’re looking for more help, check out our Solutions Center. There, you can look for an expert who will help you whittle down your credit card debt.

Do you have more tips for paying down debt? Share them in comments below or on our Facebook page.

Marilyn Lewis and Chris Kissell contributed to this post.